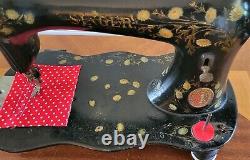 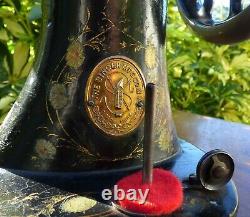 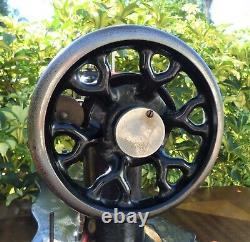 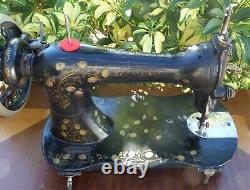 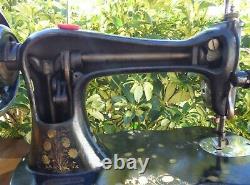 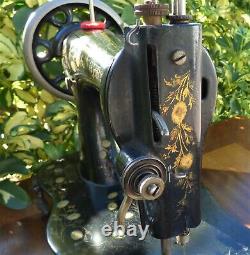 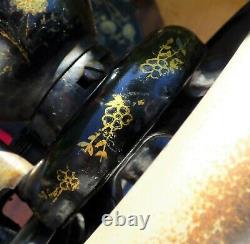 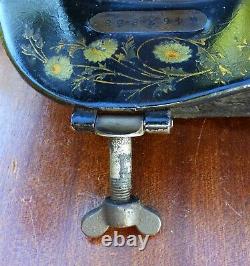 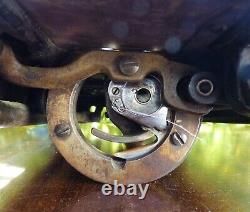 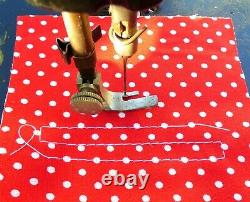 My husband and I have been restoring old Singers for more than 20 years well over 1,000 to date but we have run out of room and have to sell some of our machines in original condition, just as they came to us. We checked this one over thoroughly, serviced and adjusted it and wiped off most of the grime, but I wish we had a bigger shop and the time to restore it because this is one of the most interesting sewing machines we have ever owned. The serial number, 6467858, dates it to 1884. Singer manufactured the Improved Family from 1879 until 1895, and sharp-eyed Singer collectors will take one look at the front-mounted thread tension assembly (photo seven), and the oscillating hook (photo ten), and know that the Improved Family was the precursor of Singers famous Model 15, the most successful sewing machine in history. There are many things to love about this machine.

I love the curvy fiddle-shaped base, of course, and the way the back of the machine opens up for servicing (photos five and six). Instead of having a small round or pear-shaped covered opening, almost the whole back of the Improved Family can be removed. I also love the little acorns on the tops of the presser and needle bars and the way Singer decorated almost every part, like the tiny flowers on top of the belt guard shown in photo eight. And the tiny round bobbin in the long beak oscillating hook shown in the top center of photo ten.

Whats really interesting is that Singer went from such a small bobbin on the Improved Family to such a large one just a few years later on the Model 15. Maybe they had complaints about the thread capacity?

Speaking of thread, I loaded the bobbin and after just a few tweaks to the upper and lower thread tensions produced a nice stitch (photo twelve). We oiled the machine before our test drive and every part of it turns freely.

But my favorite part is the underside of the machine as shown in photo eleven. At the time it was manufactured Singer still had their headquarters and factory in New York City, as the enormous logo cast into the underside of the machine attests. I just think its fascinating that Singer would choose such an out-of-the-way place for such a large advertisement. Please note that this machine has two hinged screws under the back edge of the sewing bed, originally used to attach it to a sewing table or cabinet. One of the screws (photo nine) is missing this wingnut.

I mentioned that we have owned and restored over 1,000 antique and vintage Singer sewing machines, but what I didnt tell you is that this is only the fifth Improved Family that has ever come our way. They are just that rare.

Yes, the beautiful decorations, like those still faintly visible around the oval Singer emblem shown in photo three, are worn and it will take a lot of cleaning and polishing to make this machine look new again, but its worth the effort. Its a piece of sewing history and worth restoring. This thing is heavy and bulky. You have family or friends who live in the area, perhaps they could pick it up and hold it until you visit. Please ask if you have questions!

We are happy to help you. All of our goods are unconditionally guaranteed.

Thank you for looking in. The item "Fiddle Base 1884 Singer Improved Family Sewing Machine Interesting & Very Rare" is in sale since Friday, October 1, 2021. This item is in the category "Antiques\Sewing (Pre-1930)\Sewing Machines". The seller is "its-a-girl-thing" and is located in Bradenton, Florida. This item can be shipped to United States.